Welcome to Part 2 of my ‘What’s Cooking in the Kitchen’ series. In my previous post, I mentioned that the British Chef, Jamie Oliver is extremely popular with my Russian, Swiss and German clients. His programmes are televised in those countries and he has a huge international fan base. 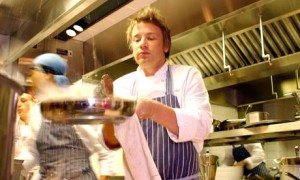 Jamie Oliver uses a lot of colloquial British English expressions in his programmes that can often leave non-native speakers of English very confused. Unless, you’ve lived in the UK for a period of time, you are unlikely to understand what he’s saying. You could simply ignore those expressions and  concentrate on the cooking, but that would be a shame. His use of colloquial British English is what makes his programmes so interesting and has made cooking so accessible to a wide British audience.

So, what I thought I would do is to show you one of Jamie Oliver’s videos and highlight some of the British English colloquial expressions he uses. As this post is also about cooking vocabulary, I will list the related expressions and words as well.

Here are some of the cooking and food vocabulary you will hear. Tick them off as you hear them.

Here are some of the typical British English colloquial expressions Jamie Oliver used in the video:

Have you watched Jamie Oliver’s food programmes? If you have, what other expressions have you heard him use that you’ve never heard before or that you find strange? Please share them here with us. One of my clients mentioned that he often uses expressions like  ‘my vegetables are steaming away‘, ” the sauce is simmering away“. She cannot understand why he uses the word “away“. The word is used idiomatically in English. It is not used in a literal sense.

In the next post, I will share with you some cooking idioms that we use in the English Language. Until then, I hope you enjoyed reading this post. Please share it if you did.