Why Do We Celebrate Poppy Day? 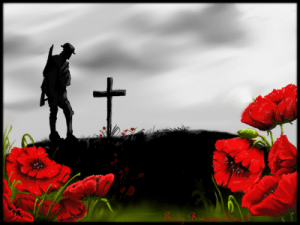 Apart from being my mother-in-law’s birthday, today is also Remembrance Day (or Poppy Day) here in the UK and the Commonwealth countries.

On this day we remember the end of the First World War and commemorate the men and women who sacrificed their lives for us in that war and all subsequent wars around the world.

At one time, it was known as Armistice Day and changed its name after the Second World War. 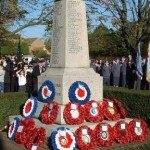 The First World War formally ended on the 11th hour of the 11th day of the 11th month after 4 years of continuous fighting. Every year since then at exactly 11am, a two-minute silence is observed throughout the UK. Special services are held at war memorials (or cenotaphs).

Wreaths are laid at the foot of the memorials by companies, clubs and societies and small wooden crosses are placed by people who lost a family member in war.

The two-minute silence is introduced by the playing of the Last Post. In military life, the last post signals the end of the day and the final farewell.

During the ceremony, a poem called ‘For the Fallen’ is read out. There is one particular stanza that is particularly poignant (special):

“They shall grow not old, as we that are left grow old:
Age shall not weary them, nor the years condemn.
At the going down of the sun and in the morning
We will remember them.”

Remembrance Day is also known as Poppy Day. In the few weeks coming up to the Day, people wear artificial poppies on their clothes. The poppy is the symbol of Remembrance Day. Its significance comes from the poem, In Flanders Field by John McCrae:

In Flanders fields the poppies blow
Between the crosses, row on row,
That mark our place: and in the sky
The larks, still bravely singing, fly
Scarce heard amid the guns below. 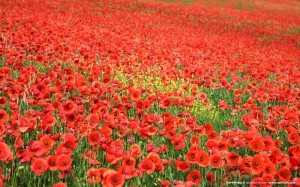 We are the Dead. Short days ago
We lived, felt dawn, saw sunset glow,
Loved, and were loved, and now we lie
In Flanders fields.

Take up our quarrel with the foe:
To you from failing hands we throw
The torch; be yours to hold it high.
If ye break faith with us who die
We shall not sleep,
Though poppies grow
In Flanders Fields.

Flanders is the name of the western part of Belgium. It was the scene of the bloodiest fighting. During the war the whole area was devastated and what were once fields and farms became a sea of mud.

Only one living thing survived – the poppy flowering each year. It brought hope, colour and reassurance to those left fighting. 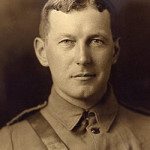 John McCrae, a doctor serving with the Canadian Armed Forces was so moved by what he saw that he wrote his poem.

Later in 1918, Moina Michael, an American, wrote a poem “We shall keep the Faith”  promising to wear a poppy every year to honour the dead. This started the tradition of wearing the Red Poppy.

The British love their traditions and Remembrance Day is one of the most important traditions that they uphold with reverence.

Remembrance Day honours not only those who fought and died during the two world wars but also all the conflicts that the modern world has seen and sadly, continues to witness.

I may not agree with wars but I thank all those men and women who gave and continue to give their lives for a better world. You will never be forgotten. 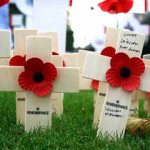