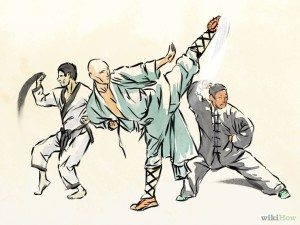 I am back, folks!!!! It feels like I’ve been away for ages. Have you missed me? Well, I’ve certainly missed  writing a post and your comments. So without further ado, let’s get started.

I had a business meeting in Southampton in the south of England on Monday. Whilst on the train, I caught up on my reading, especially professional teaching journals. One article I read (Another String to Your Bow by Trev Hill, Issue 99 of ETp) was about how martial arts could be used in the language classroom. I don’t mean actually practising martial arts with learners (imagine me kick boxing!) but the article suggested that “martial arts can provide a wealth of cultural and linguistic information which can be used to learn vocabulary and grammar”.

The author suggested a number of ways that learners could learn useful general vocabulary related to martial arts through films, TV and computer games. Words such as, high kick, block, punch, fist and so on.

Martial arts have also contributed to a number of idioms to the English Language and the author shared a list of 16 idioms in the article. I would like to share them here with you. These idioms are frequently used in everyday language and I must admit I wasn’t aware of some of these idioms’ origins. It made for an interesting read. I hope you think so too.

1. To come to blows (general)
to start fighting

They came to blows over the issue of whose responsibility it was.

2. To keep your guard up (general)
to be careful or ready for anything

He’s a tricky client, so keep your guard up.

3. To block and parry (general)
to block is to stop an opponent’s technique, either with an arm or shield; to parry is to block and divert the blow

The politician refused to give a direct answer and parried all criticism.

4. To add another string to your bow (archery)
to gain a new skill which may be helpful later

I have a first aid certificate but I don’t know if I’ll ever need it. Still, it’s another string to my bow.

5. To get to grips with something (wrestling)
to start to deal with a problem or a job

I tried to get to grips with the basics of chess, but I soon gave up.

6. To pin someone down (wrestling)
to get someone in a position where they have to talk to you, say what they think or make a decision

Joe kept avoiding me, but I finally managed to pin him down.

7. To be a stickler (wrestling)
to be a perfectionist or someone who keeps closely to the rules

I’d better check this email again. My boss is a stickler for correct spelling and punctuation.

8. To have a stranglehold over someone (wrestling)
to restrict the ability to function
(a stranglehold is a technique for choking an opponent. It is often used as a restraint)

The government’s new tax has put a stranglehold on small businesses.

9. To be up against the ropes (boxing)
to be in a desperate situation

We have lost a lot of money, and if things don’t improve, the firm will close. We are really up against the ropes.

10. To be in a tight corner (boxing)
to have little choice or manoeuvre (similar to the above idiom but more frequently used)

We don’t have many options left; we’re in a tight corner.

11. To be out for the count (boxing)
to be unconscious or asleep
(when boxers are hit hard and are dazed or unconscious, the referee counts to ten. If the boxer recovers before ten, he is allowed to continue; if he doesn’t stand up before the count of ten, he is out)

I tried to wake you up this morning, but you were out for the count.

12. To take the gloves off (boxing)
to stop being nice or stop playing by the rules

I’ve given him so many chances and he’s messed me around. That’s it, the gloves are off. No ‘Mr Nice Guy’ anymore!

13. To hit below the belt (boxing)
to do or say something to gain advantage which is considered morally questionable

You mentioned her problems with depression during the meeting? That’s hitting below the belt!

14. To cross swords with someone (fencing/swordfighting)
to have an encounter with someone, usually disagreeable

That new sales assistant is a real troublemaker. We’ve already crossed swords with each other.

15. To be on your guard (fencing)
to be careful and ready for trouble
(similar to the French fencing term ‘en garde’ which is called out at the beginning of a fencing match to tell the fencers to be ready).

The new Managing Director is so unpredictable in his reactions that I find myself always on my guard.

16. To fence with someone (fencing)
to try to outwit someone or test their ability

The two lawyers fenced with each other, but neither got the upper hand.

I am sure that some of the idioms are used in your language as martial arts are practised throughout the world. Do please share them here with me and your fellow readers.

If you liked this post and feel that others could benefit from reading it please share it. And don’t forget to subscribe to my blog if you want to receive more posts like these directly to your inbox.