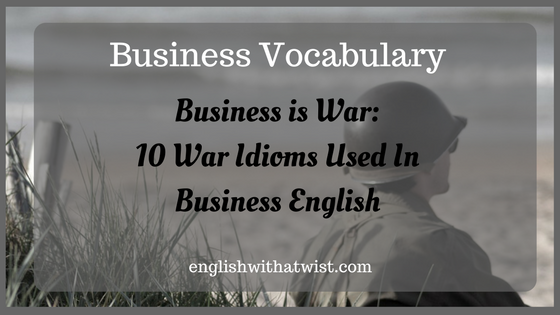 This weekend my husband and I attended a fancy dress party to commemorate the 75th anniversary of the Battle of Britain during World War Two. My husband went dressed as a SAS (Special Air Service) commando and I went as a Royal Air Force (RAF) ground crew. We had a lot of fun and were rewarded with an air display of the Spitfire.

“That’s all well and good, Shanthi, but what has your weekend got to do with us learning English?” – I hear you say. Good point. As many of you know, I often use episodes and situations in my life as a trigger for my posts. I spend most of my time thinking how I can transform an everyday (or special) event into a language learning opportunity. And last weekend’s party was no exception.

As I was enjoying myself, I was thinking of ways I could bring references to war to a post and I found it – business.

The world of business is filled with references to war idioms and expressions. Many people refer to business as war. Think of all those verbs we use in English related to the military that are used in Business English – attack the opposition; defend our position in the market; we need to capture a larger slice of the market; we have to reinforce our message if we are to fight back.

Most businesses require a strong strategy if they are to succeed. Therefore, they need to think strategically if they are to win the battle. Being on the defensive is not an option. Sometimes, aggressive moves are required.

I know from teaching my business clients that the above expressions are known and commonly used by native and non-native speakers of English alike in business meetings and written communications. Business journals and media are filled with these expressions. If you are to communicate effectively in business, it would be worth your while learning these war idioms. In addition to the expressions above, I have picked 10 war idioms and provided some background explanation together with examples.

1. Take (the) flak – to receive strong criticism or opposition
“flak” refers to the firing of bullets at enemy aircraft from the ground

“Volkswagen/Audi has taken some serious flak for misleading US regulators over the emissions of their diesel cars”.

2. Set your sights on – target something
In combat, one side sets its sights on (targets) the enemy before shooting.

3. A minefield – a situation that is very complicated with hidden dangers and problems
Also refers to a piece of land that is filled with mines (bombs)

“If we adopt that approach we could enter into a potential legal minefield. I’m not sure it would be worth it.”

4. Lay low – to wait before doing something
In the military, soldiers often lay low (hide) and wait before attacking their enemy.

“I think it would be better to lay low until the economy starts picking up. That way we’ll have a better chance of fighting back”.

5. Give up without a fight

“I don’t understand Tom; after years of sacrifice he simply gave up without a fight.”

6. Lose ground – to suffer losses or setbacks
In land warfare, it’s important not to lose ground against the enemy

“Despite our best efforts, the delays in implementing the new software has meant that we’ve lost precious ground against our competitors”.

7. To be your own worst enemy – to cause most of your problems because of your character/shortcomings

“The company’s CEO is its own worst enemy; his refusal to adapt to the changes in the market is going to spell disaster for the company in the long run.”

8. Casualties – people or things that are badly affected by something happening beyond their control
(Military) The injured or wounded

“The marketing team is always the first casualty in the cutbacks”.

“When it comes to doing business Jack takes no prisoners, so good luck!”

“If we are to compete successfully in this market, we need to have a take no prisoners attitude”.


10. Make a killing – to have great financial success

“George Soros made a killing on the British pound in 1992 which led Britain to leave the Exchange Rate Mechanism”.

Take a look at some business journals and pay attention to the expressions used. You’ll be surprised by how many references there are to war. After all, business is all about winning the competition and so is war.

I hope you found this post useful. If you did and you think that others could benefit from it, please share it.

If this post inspired you and you want more, join the EWAT community and get weekly lessons delivered directly to your inbox.