Business Skills: Shakespeare in Business – A Lesson in Leadership 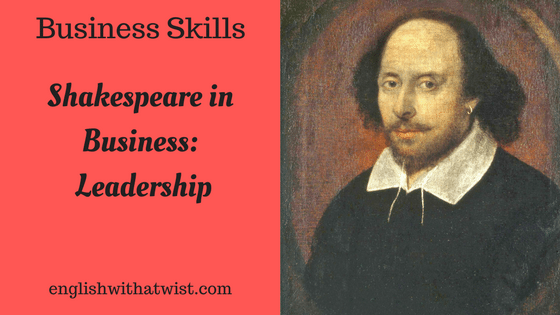 I couldn’t possibly not write a post about Shakespeare on the 400th anniversary of his death, so I decided to look into the theme of leadership in Shakespeare’s plays, in particular, what the Bard has to teach us 400 years on about what makes a good or ineffective leader.

The central theme of Shakespeare’s plays is power and its exercise, in other words, leadership. He was interested in all aspects of political power – how it is obtained, how it’s used, how it’s misused and how it affects the user. Today, 400 years later, we still refer to Shakespeare’s plays to learn about leadership skills whether on the political stage or in the corporate boardroom.

Power
Shakespeare was interested in the shifts of power that could happen to a leader. Take the corporate world, for instance, how can someone be a top CEO one day and be arrested for fraud the next day.
In King Lear he shows us how the king makes the fatal mistake of letting go of power while still expecting to have the privileges and respect power commands. And in Othello, he shows us how the subordinate, Iago brilliantly uses the power of suggestion to turn his commander (Othello) into a puppet.

The struggle for power is not only explored in his tragedies but also in some of his comedies. For example, the struggle of power is a central theme in the Taming of the Shrew between Petruchio and Katerina.

Types of Leadership
If you want to get a flavour of the types of leadership, both good and bad, in the world, look no further than Shakespeare’s characters. Let’s take a look at some of his leading characters and their traits.

The ineffective leader – Richard II
Richard II has all the traits of what an ineffective leader is. He has no strategy or clear idea of what he wants to use his power for. He acts as if his rights and privileges are a result of who he is and not of his does or has done (his actions). He acts as if he is beyond the law. He exercises his power arbitrarily (unfairly)and is not shrewd. He ends up making many enemies and ends up being deposed. He believes in the divine right of kings. This is like as if today’s CEO believes they have a right to be at the top not through merit but because of who they are.
He is not a bad person, but he is in the wrong job.

Richard has to learn that leadership is like a performance – a role-  you have to perform that has to be carefully judged. It’s not about the person but the position that you hold. He is unable to do that.

The failed political leader – Coriolanus
Coriolanus is a highly successful military leader who makes the fatal error (mistake) of going into politics. He needs to ask for people’s support to get votes. He refuses to even try to manipulate his audience. He thinks that he is superior to this and despises the common people. He is arrogant and it’s that arrogance that doesn’t win him supporters.

He is an effective communicator but the message he delivers is unpalatable and he doesn’t know it. His message is this:
“You know I am the greatest warrior on earth so why should I have to bend down to you and get your blessing to be your civilian leader?”

So, he learns the hard way that leadership is a contract between both sides. Both sides have to buy into the contract. It’s not enough to want to lead people, you need to gain their trust. You need to give them the ability to have a sense of self-worth and self-accomplishment.

The unprincipled leader – Macbeth
Macbeth is the prime example of a leader who sacrifices all principles for the sake of power and plants the seeds of his own destruction. The play demonstrates the corrosive (destructive) effect of seeking power for its own sake. He’s acting to achieve what’s best for him not for his country. So he proceeds to consolidate his power by removing (murdering) anyone in his way. It’s power as an end in itself and not a means to an end.

The brilliant and effective leader – Henry V
By far the best role model for effective leadership, Henry V is a brilliant communicator. He knows how to get his people on his side. He is not interested in wealth or status, but cares for honour.

His speech rallying the troops before the Battle of Agincourt is the best speech of all of Shakespeare’s plays. He says:

“We few, we happy few, we band of brothers;
For he to-day that sheds his blood with me
Shall be my brother; “

It’s an extraordinary statement for a king to make to his troops, but it was exactly what they needed to hear – that they were united with their leader in an enterprise that had the potential to be greater than themselves. And we all need that sometimes, to feel united in something that is greater than ourselves. That is leadership.

Henry knows his people because he has done his research. He goes around talking to his soldiers incognito to find out what their true feelings are about the campaign. He is like the kind of CEO we want to work with, that is, the one who never loses touch with his or her employees and takes every opportunity to communicate with them. He knows how to inspire his people and rally their support.

If you want the best example of effective leadership, look no further than Henry V.

Shakespeare’s plays are full of characters who are or aspire to be leaders in one way or another but few of them are wholly admirable and this may be the single most important lesson we can learn about leadership – that we should treat it (leadership) with a healthy dose of scepticism.

Thank you for being with us these last 400 years, Will. You are a true leader of the English Language and of what human nature is all about.

I’d love to know what you think about Shakespeare and leadership. I hope you enjoyed this post and
if you think your friends and colleagues would enjoy it too, please share it with them.