Business Skills: Taboo or not taboo? 10 Small Talk Topics To Use OR Avoid With The British (Guest Post) 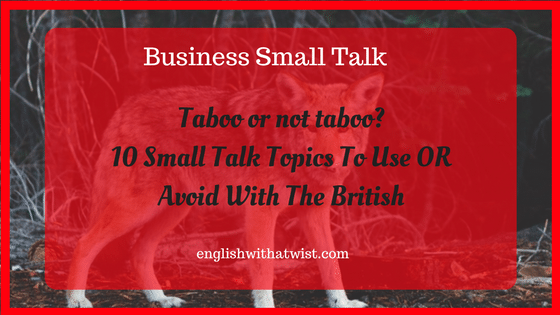 I am delighted to introduce you to a Business English teacher I admire hugely for this guest post. I met Phil Wade through Facebook over a year ago. Phil is a huge personality in the Business English teaching community. He is a prolific writer of e-books and is incredibly generous with his time and knowledge. He has written a number of books on the subject of taboo and non-taboo topics that learners should be aware of.

This subject is especially crucial when engaging in small talk in English especially in a business situation. After all, the last thing you want is to lose a lucrative contract because you started talking about a taboo topic!

In this post, Phil shares with you what you can and cannot discuss with the British.

Take it away, Phil.

British people are famous for small talk. You might have heard stories of Brits talking to complete strangers for hours at a bus stop or on a long plane journey but never introducing themselves or sharing any personal information. Brits can talk to a shop worker every day for years just using small talk.

To become good at small talk you must know which topics you can use but also the topics you cannot. Small talk is VERY cultural so you need to understand what British people like talking about and what they think is taboo. You don’t want to make the other person angry by asking questions about a taboo topic.

This blog post explains some common taboo, not taboo and risky smalltalk topics to help you become a better small talker.

We Brits don’t like to be asked very personal questions so don’t ask too much about what people do, how they do it, where they do it and who with. In some countries shop staff ask many questions about why you are in the country, where you are from, where you live and even who you work for. Keep your distance and only give very basic answers like “I work in IT” or “I work for myself”. The other person will usually understand you don’t like the questions and should change topic.

Your salary isn’t that important in England and neither is your job title. People don’t really care about how much money you make or your job title. I have seen directors, managers and student interns chatting and smoking and all using first names. I think we have an idea about people’s salaries but also believe that people who work hard should get more pay. When we hear of a president on a high salary we see that as normal but we would never ask him how much he or she earns. If someone does ask you, try saying “enough” or “it’s OK”.

Your home address is very personal and you shouldn’t give it to just anyone. It’s OK to say which city you live in and even sometimes your area but the street and your house number are very important. Small talk is just about talking because we don’t like silence. It’s not for finding out lots of information about the other person. I’ve worked with many colleagues but have never asked or known their home addresses.

It’s not very common to see marital status or family members on British CVs but it is in other countries. Again, like address, it is just too much information. Yes, people can see from a ring on your finger if you are married and probably guess if you have kids. Some people may mention their wife or kids and then it’s OK to mention yours. You may even see people exchanging photos of their family during a long conversation on a plane or train. One reason is because the 2 people will probably never see each other again.

Brits love complaining. It’s the national hobby for most people. Many Brits think everything is expensive so you can complain about high prices. They are sometimes right too. Every year, the ticket prices for some trains and the underground go up. Transport can be a problem in the UK because the system is old. Complain about how late, early, full or empty buses, trains or roads are.

A good way to make small talk is to talk about new places in the area. Maybe you know of a new shop, a cafe or restaurant. You could tell the other person about it. If they haven’t been, they will be happy to hear about it.

Try the simple question “have you been to the new…?” or make a simple statement like “there is a good new restaurant” and don’t forget to add a small question at the end to keep the conversation going. You could try “Have you been?” or “Do you know it?”

American politics is a safe topic as many of us know about it and we don’t vote in US elections. Many Brits follow American politics and know about Trump and Clinton. You could ask what the other person thought about the presidential election if you have talked for some time. Don’t start a small talk conversation with this topic though.

Be careful though as this topic might move into UK politics and that can be sensitive.

We complain about the cold weather and also the hot weather. The weather changes a lot in the UK so there is always something we don’t like so this is the best topic for smalltalk. British weather is terrible but interesting. You could probably just talk about this for at least 3 hours. A day can start off cold then get hot and sunny, have some light rain, heavy rain, pour down (rain a lot and heavily), the heavens will open (a downpour) and then a mild westerly breeze will turn into a gale (a strong wind) and finally it will brighten up. As you can see, we have a LOT of vocabulary for the weather too. (Thanks for the tip, Phil…a definite recipe in the book!)

The following topics could be risky so try them at your own risk. You probably have a 50/50 chance of them being really good conversation topics or of making the other speaker angry. These can be seen as ‘make or break’ topics so you have been warned.

Is it good or bad? Is Farage a hero of the people who has saved us from the Europe politicians or a an evil leader who has destroyed our economy and place in the world. Can we get a ‘soft BREXIT’ or must we take a ‘hard BREXIT’? These are important questions that many talk about every single day.

Lots of Brits like football. Some even love it. We say that football or ‘soccer’ is a religion. You might try the classic small talk question “did you see the game last night?” or “did you see the Arsenal game?”. If you both like Arsenal you will have a great conversation. If you like different teams you could have an OK conversation. However, if your team lost to Arsenal or beat them it won’t be comfortable.

Now it’s your turn. Try to do small talk this week and see what happens.

Thank you so much, Phil. These tips are excellent and I know my readers will be referring to the list time and time again.

Get his free ebook on Smashwords and iTunes.

Get Your Small Talk To Go E-Book + Workbook + Audiobook Here 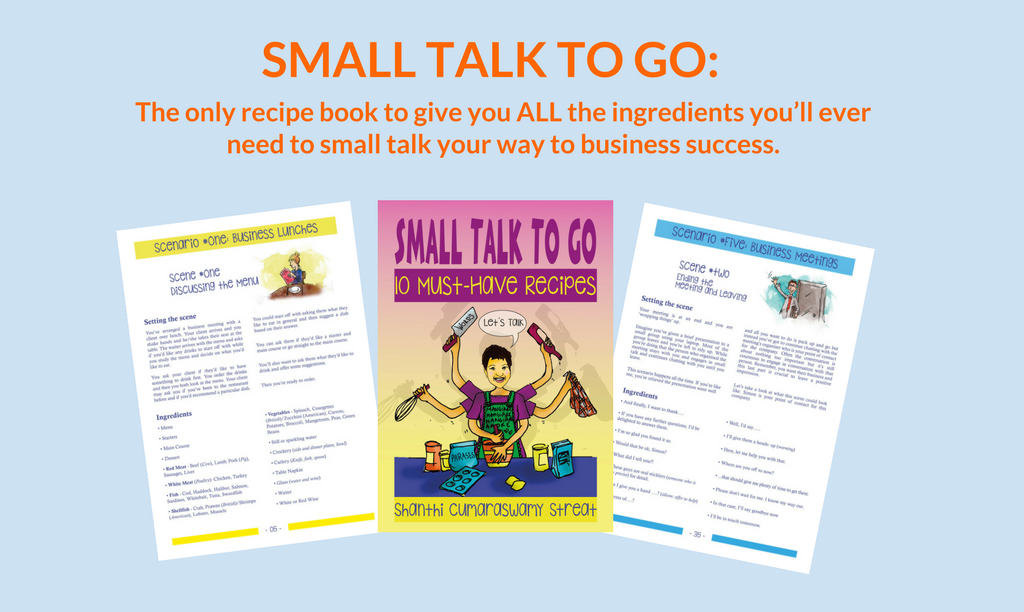