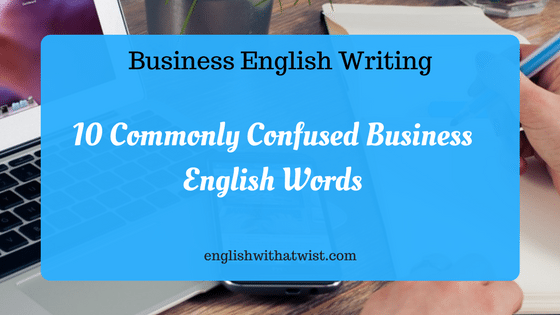 There are many pairs of words in English that often confuse not only learners of English but also proficient and native speakers of English.
Take, for example, a while and awhile.
#1 A while is a length of time. Awhile means “for a time”.
“The meeting starts in a while ( a few minutes, an hour). The meeting lasted awhile (for a period of time).”
They are pronounced the same way, have the same letters but have two versions. The one-word version describes  a period of time and the two-word version describes time. So it’s important to use the versions correctly especially in business writing.
Here are 9 more commonly confused pairs of  business words:

This is simple. There is no such word as alot.

“The campaign ad was a huge success. We’ve had a lot of enquiries.”

Note the pronunciation first of all.
It’s adverse /ˈæd.vɜːs/   and averse /əˈvɜːs/
Adverse means negative, harmful
“They received a lot of adverse (negative) publicity as a result of the changes”
Averse means against or opposed to
“I am averse to the idea of sending a blanket email to all our clients about this.”

You can also say the opposite, in other words, you like something in this way:

“Between the two candidates, Alicia is better qualified.”

“Among the three candidates, Alicia is best qualified.”

When you convince someone, you change their way of thinking.
“I managed to convince Tony that we needed to have a complete new rebrand.”
Persuade

When you persuade someone, you motivate them to act.

“I persuaded Tony to discuss the matter with the team.”

(Note — it’s always convince of/convinced that and persuaded to.)

Discreet means prudent, diplomatic, careful
“This job needs someone who can be discreet because of the sensitive issues we deal with every day.”
Discrete means separate and distinct.
“If we look at the discrete sales periods in the last two years, you can see a significant change”

Ensure is to make certain.
“We need to ensure that the clients are informed of the date change”. (In spoken English, we often use “make sure + that” instead of ensure)
“We are determined to ensure customer satisfaction at all times.” (This is often used formally especially in marketing literature).
Insure is to protect against loss, especially financial loss.
“I have to insure my car”.

If you’re referring to two points in a sentence, former is the first of two points and  latter is the second point.

“Of the two suggestions, I prefer the former (the first suggestion)”.

“She offered me more money or a car and I chose the latter“. (the car)

Practicable means feasible, possible
We will organise the marketing campaign as soon as it’s practicable.
“It’s not practicable to get everyone to fly in for the meeting at such short notice”.
Practical means realistic rather than theoretical.

“We need someone who has practical experience of dealing with customer complaints.”

“We offer young people practical advice on finding a job.”

I’ll be looking at commonly misspelt words in Business English. In the meantime, do let me know what other pairs of words confuse you and I’ll create a lesson around it.

I hope this post was helpful. If you think your colleagues and friends could benefit from knowing about EWAT, share this post with them and encourage them to join the EWAT community.