Business Vocabulary: 20 Ways Of Describing The Ups and Downs of Business 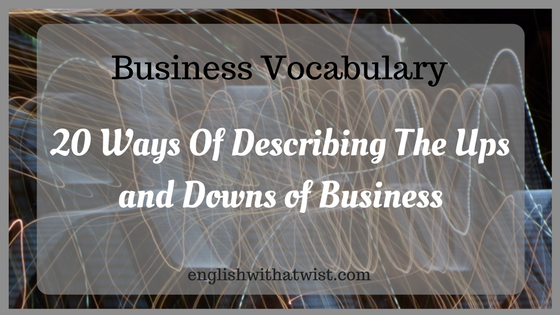 “Remember that life is full of ups and downs. Without the downs, the ups would mean nothing.”
There is a saying in English that reads: “What goes up must come down”. Taken literally, it refers to gravity; whatever you throw up in the air will come down.

However, it is also used metaphorically and means that something good doesn’t last forever.

Do you have a similar expression in your first language?

I am sure you’ve heard people say that success, good times, wealth don’t last forever. Do you agree with this point of view?

In business, especially the stock market, nothing stays up forever.
Businesses will enjoy good times, but will also experience difficult times. If they are quoted (recorded for trading) on the stock exchange, the good times will be reflected in their share prices rising. By contrast, their falling prices will warn us of the hard times they are suffering.
And of course, some businesses are more volatile than others meaning their prices will fluctuate (change) more frequently and sometimes by a lot.

It’s not just prices that fluctuate. Sales growth, company profits, costs, turnover and so on can rise and fall too.

Running any business means paying attention to the rise and fall of many factors – sales, labour costs, expenditure, profit, loss. It may also mean having to report on these changes, say at a client presentation or a shareholders’ meeting.

The rise and fall can be small or large but to give an accurate idea of these fluctuations you need to use the appropriate words in English.

In this week’s post, I want to explore some of the language we use in business to describe the rise and fall of share prices.

Business company news and share reports are an excellent place for you to discover the English expressions we use to describe business trends because they’re authentic and current.

I have selected random business headlines from the BBC News Business Report and highlighted the ‘up’ expressions in blue and the ‘down’ expressions in red.
Some expressions may be surprising to you especially if you’ve learned how to describe trends from Business English course books and are familiar with a group of words like surge, plummet, revive, tumble.
That’s why it’s so important to look at authentic material when expanding your Business English vocabulary. Because you’ll discover different expressions and words used to describe things.
Whilst, you don’t have to use them, you’ll be in a much stronger position when it comes to understanding what is being said if you’ve already seen the language in context.

Describing the rise and fall

#1
The pound fell and the FTSE 100 rose after the Bank of England announced it was leaving interest rates unchanged and downgrading UK growth forecasts.
#2
The Bank also warned Brexit uncertainty was beginning to drag on UK investment.
#3
Sterling dropped 0.6% against the dollar to $1.3146 and shed (lost)0.78% against the euro to 1.1068 euros.
#4
The 100-share index gained ground (idiom). It built gains as the pound slipped(idiom) further throughout the afternoon to end 63 points higher at 7,747.
#5
Clothing retailer Next saw its shares surge (suddenly and strongly) 9.2% after it increased its dividend to shareholders.That makes sense because a 9.2% increase in a day is big.
#6
British economic growth has softened again following a modest improvement in the second quarter, according to the National Institute of Economic and Social Research.
#7
“The service sector, which was the main driver for economic growth in the second quarter, appears to have slowed.
#8
“We see a modest recovery in the second half of this year in response to strengthening global growth and a weaker currency, but on the flip side, consumer spending is likely to be weighed down by weak wage growth and investment spending held back by Brexit-related uncertainty.”
#9
Earlier today, official data from ONS showed that UK industrial production shrank in the second quarter of the year.
#10
Estate agency group Savills pushed up pre-tax profit by 27% to £32.4m in the first half of the year despite a slowdown in the UK.
#11
In fact the boost came from Asia and its real estate management arm: Savills gets nearly two-thirds of its revenue outside the UK.
#12
Fee income from UK residential sales fell by 4%, with the number of transactions lower than a year earlier when trading had been lifted ahead of changes to stamp duty in April 2016.
#13
The FTSE 100 has continued to slide today. It’s down 92.87 points, 1.24%, which points to more than the drag of some key company shares going ex-dividend.
#14
Saying that four out of the five biggest losers are ex-dividend, the exception being InterContinental Hotels, which has slipped 2.64%.

#15
Across the wider indices, the biggest loser is Leicestershire brick-maker Ibstock, down 5.24% to 234.90p. This morning it revealed that pre-tax profits for the last six months climbed almost 3% to nearly £39million.
#16
Industrial output in Britain unexpectedly picked up by 0.5% in June, according to official figures published by ONS today.
#17

South Korea’s Kospi slumped 0.4% to a seven-week low, while the won currency fell to its weakest position in a month.

#18
Wanda shares jump on restructure plans.
#19
On the other hand, Coca-Cola HBC fizzed up 8.39% to be the index’s biggest winner after it delivered solid first-half earnings. I love this play on words – using the ‘fizz’ from a Coca-Cola can or glass being opened to describe the rise in price.
#20

Over to you
Take a look at the business news reports in English, like the BBC Business Live Report.
Have a look at the headlines and observe the words they use to describe the ‘up’ or ‘down’.  Make a note of them,
Then try and work out if the rise or fall is big or small. You can often work this out by the figures they use.
What other words have you seen, discovered or use to describe the ups and downs of markets, prices and so on?
Do share them with me in the comments box.
Before you go,
If you liked this lesson and want to receive more lessons directly to your inbox,  why not join the EWAT community?
Not only will you receive your FREE weekly lessons every Friday, you’ll also receive 3 more bonuses completely free.
Sign up today and be a part of the fast-growing EWAT community of professionals.
I can’t wait to welcome you.
Ciao for now
Shanthi
Share56
Share9
Tweet
Email
65 Shares