Business Skills: How To Deal with Hostile Questions in a Business Meeting….in English. 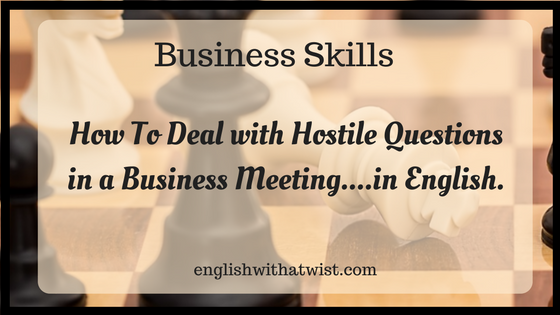 “This is such fun. I can’t wait for the next hostile question!”
Imagine you’ve been asked to present at a business meeting.
The subject is an ongoing project you’ve been working on for nearly a year. Your presentation is a progress report on the project.
There’ve been a number of delays with this project – some caused by your team and others beyond your control.
The point is that management is getting frustrated by the time it’s taking to complete the project.
A lot of money has been spent, the launch has been delayed and investors and shareholders are beginning to question your company’s competence.
You are very likely going to face a hostile audience during this meeting who are inevitably going to ask you some uncomfortable questions.
They’re not going to necessarily be friendly.
You need to be prepared for the barrage of hostile questions.
The key is to be diplomatic but firm. You can disagree strongly, but try to avoid saying ‘No’.
Listen to the lesson

How do you avoid saying ‘No’, I hear you ask?
To start, you can keep your answers short and simple. If necessary, you can be vague.
Then, you can use certain expressions that will help you say ‘No’ in a softer way. Expressions like ‘hopefully not’, ‘not quite’, ‘not at all’ and so on.
In this lesson, I am going to show you how to use 12 of these expressions.
I have divided them in 3 exchanges and highlighted them. I got this idea from Mark Powell’s book “Presenting in English”.
Exchange 1
Have you reached an agreement with the Czech authorities yet?
Not yet. There are still one or two things we need to discuss.
But you’ve had three months to discuss them.
True. Three months seems a long time but that is the standard waiting time with the Czech authorities.
Mm, hasn’t the fact that we know important people in the Czech government helped at all?
To some extent, but we still need to go through the bureaucracy. We hope to get a final agreement in November.
November! That’s going to create all sorts of problems with the launch.
Hopefully not. We’ve managed to reschedule a number of things and it might just work.
Exchange 2
So we lost all our records when the network went down, did we?
Not quite. Just the last two months.
I see. I suppose it’s too late to recover any of the data?
Not necessarily. There may just be a way of retrieving some of the files.
What I don’t understand is why the Logistics Department did not back up the system?
Yes, I know. It is standard procedure.
Does this happen a lot?
Not as a rule. It was just one of those unfortunate things.
Exchange 3
You have to admit that this has been a marketing disaster.
Not at all. The team has done an excellent job. It was a tough project.
But wouldn’t it have been better if you’d outsourced the creative work?
Not really. For one thing, it would have cost significantly more.
But it was you who said we should spend more on promotions.
Granted. But we don’t have the budget to outsource the work.
So you’re happy with the way things went?
Not entirely, but I don’t think it was a complete disaster either.
Over to you
Using the above expressions, create similar exchanges using a recent difficult situation you had.
Then, practise the exchange with someone.
If you don’t have someone to share the exchange with, share it with me in the comments box and I’ll give you feedback. 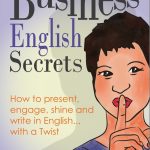 By the way, have you explored the emergency toolbox I’ve created just for you?
Click on the image to find out more.
Next week,
Guest blogger, Steven Wesley, will show you how by improving your business writing you can master spoken English.
If you don’t want to miss that lesson, make sure you join the EWAT community today and next week’s lesson will be delivered automatically to your inbox.
Ciao for now
Shanthi
Source: Presenting in English by Mark Powell
Share26
Share
Tweet
Email
26 Shares