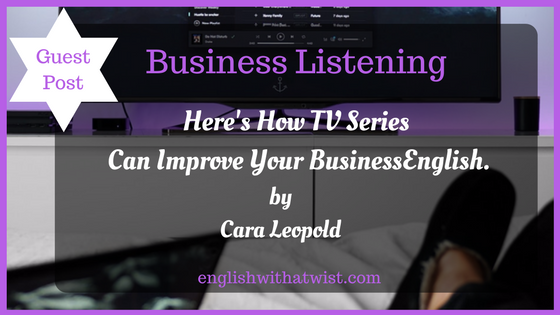 It’s the last Friday of November and that means one thing… a new guest blogger.

Cara Leopold’s (a listening skills expert) mission is, in her words: “to help bookworms and vocab nerds break free from subtitles so they can stop “reading” their favourite shows and films and start watching them.”

You’re probably thinking…. hang on, Shanthi, what has watching TV got to do with Business English.
Let me leave it to Cara to explain.

Over to you, Cara

Tv series. Those things you watch when you’ve got nothing better to do. When you’re stuck inside on a wet Sunday in your pajamas. Surely they’re just a bit of fun?

I beg to differ. Watching TV series in English is one of the best ways to spend your free time. And you can learn a lot about business from them too.

I’ve picked one of my favourite business shows of all time, The Office, to give you some tips on how to understand it.

The Office I’m talking about is the BBC version that ran for 2 seasons from 2001 to 2003. It’s a work of subtle comic genius.

It’s a mockumentary which is a blend of the words “mock” meaning fake and documentary. It follows the lives of the employees of fictional paper company Wernham Hogg based in Slough in the south east of the UK.

Ricky Gervais, who co-wrote the show, stars as David Brent, who’s possibly the world’s worst manager.
Let me guide you through 3 of David’s most awkward business situations, so you can understand him and learn what not to do in terms of business skills.

#1 If the interviewer does this, run away.

In one of the most awkward scenes ever, David tries to charm his interviewee, using rather creepy tactics. He’s hard to understand as he spends the whole interview smiling at Karen and not opening his mouth much.

➣ 2’00 – Karen mentions that she did GCSEs and A-levels.
A GCSE is a General Certificate of Secondary Education, an exam you take when you’re sixteen. A-levels are the qualification you take to get into university.

➣ 2’55 – ‘notice’ is the period of time you have to work in a job, before you can leave. Many workplaces require a month’s notice so they have time to find you a replacement. ‘Put you on (a month’s) probation’. This is a period of time in a new job where the employer checks to make sure you know what you’re doing.

⚠️  Making Karen talk about her personal life, rather than her qualifications and experience

⚠️   Suggesting that Karen was ‘exploring herself’ while travelling on a year out. And ‘getting what you can, while you’re young’ because she was travelling alone.

#2 How to have sub zero self-awareness

In this scene, David has decided to leave the company and is consoling his employees about his departure. Except they don’t care. It’s one of the best tragi-comic moments of the series. Especially when Big Keith ignores David completely and steps on his foot.

It’s normal for people to overlap like this in conversation as we build it together. Usually though you’d expect 2 people in a collaborative exchange to say the same thing. Not in this case, though.

➣ 1’32 David announces “I’m telling this to everyone. Erm I do not want you going oh that’s it, we’re out of here, there’s no point or walking round with your shoulders hunched…”

“Sorry can I just get that…”

He assumes that his colleagues are all going to leave once he goes “we’re out of here” or be sad about his departure “walking round with your shoulders hunched”.
(⚡️ When your shoulders are ‘hunched’ you curve them forwards, often to indicate you’re unhappy or fed up.)

David’s colleague is much more interested in the phone call he’s been expecting and even says to David at 1’52 “Sorry what were you saying?” showing he wasn’t paying attention. He also interrupts David to talk to another colleague, Oliver, and phones Steve.

➣ 1’46 “oh that’s great, no that’s a load off my mind”
If something is “a load off your mind” then it’s a relief and you no longer need to worry about it.

Oliver: “All of it? You lucky… You were bricking it you know”

‘They took the lot’ means ‘they took everything’. We can assume this is some stock the sales representative wanted to sell.

Oliver replies “you lucky…”. Normally he would have ended that expression with a rude word.

Bricking it – If ‘you’re bricking it’ then you’re very scared or anxious. This is a very informal, vulgar British expression. Don’t use it with your boss!

This is one of those clips that makes me laugh so hard I can’t breathe. David gets invited to another company to give a motivational talk.

We’re going to concentrate on the start of the clip up to 2’40, excluding the section with receptionist Dawn talking to the camera.

➣  0 – 0’08 We can hear the rhythm of English in this section. David reduces the grammatical words right down and emphasises many of the content words. Just listen to the way he says ‘endorphins’ at 0’02. He puts a lot of emphasis on the stressed syllable. enDORphins

Here’s the transcription of that section: “When you laugh, your brain releases endorphins, yeah. Your stress hormones are reduced and the oxygen supply to your blood is increased.”

In this section, it sounds like David hasn’t prepared too well for his talk. Or that he’s feeling awkward about what he’s going to do. He makes false starts and repeats himself. Not what you would hear in a well-prepared speech.

David is a little trickier to understand again at the end as he’s talking normally again and not doing his presenter voice.

➣  1’20 “I am now gonna make like a banana and split” => this means it’s time to leave, it’s time for me to go.
It’s a reference to a type of dessert called a “banana split” and also to the expression “let’s split” which is an informal way to say “let’s go”.

#Tip 1: The great thing about TV series is that you follow them week to week. This means you gradually adapt to the characters’ voices and accents. You also hear the same words and expressions on a regular basis. So the more you watch, the easier it is to understand.

#Tip 2: Pick one series to focus on at a time. And make sure you enjoy it so you’ll keep coming back for more.

#Tip 3: It’s okay to watch with the subtitles. Plus you can choose to turn them on and off. There are 2 ways to do this. Either you watch for ten minutes with and then ten minutes without (thanks as ever to my colleague Elfin for this tip). Or you leave them off and only turn them back on again for scenes where you’re a bit lost.

#Tip 4: Prepare yourself for watching a series by doing a little bit of research before you begin. You can familiarise yourself with the plot or learn the characters’ names before you start watching.

#Tip 5: Do a bit of intensive listening work to complement the passive stuff you’re going to do anyway by just watching the show:

➣ Watch it without the subtitles

➣ Pick a short section and write down what you hear

➣ Compare it to the subtitles or the transcript

#Tip 6: Some things will be impossible to understand. Even with the subtitles! In series, you’ll hear references to cultural phenomena – other series, lines from movies, famous people, famous jokes, actors, sporting trivia etc. You can’t possibly know all this if you’re not from the country.

Even though I’ve been in France for 10 years, I don’t know everything there is to know about French culture. And neither do French people.

When I watch US TV series I don’t always understand all the references. I’m not American. Too bad. I can appreciate the series anyway, even if I miss a joke or two. And so can you.

# Tip 7: Make the series your own. Do any of the observations ring true to you? Do they remind you of situations you’ve been in? A bad boss you’ve had? An annoying co-worker?

# Tip 8: Come share your impressions, ideas and struggles in my Subtitle Freedom Club on Facebook. We’re a bunch of series lovers, struggling with weird accents, crazy vocab and mumbling actors. And we’d love to know if you’ve ever had a manager like David Brent.

What are some of your favourite business-themed TV shows? And what have you learned from watching David Brent? What shocked you the most about his bad business skills?

Let Shanthi and me know in the comments. 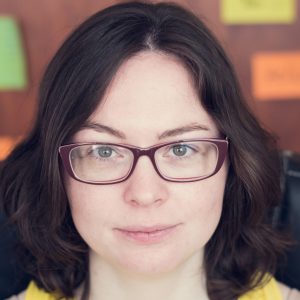 Hi, I’m Cara Leopold, the online English listening teacher at Leo Listening. I help bookworms and vocab nerds break free from subtitles so they can stop “reading” their favourite shows and films and start watching them.

Ciao for now, my EWATers.

This website uses cookies to improve your experience while you navigate through the website. Out of these, the cookies that are categorized as necessary are stored on your browser as they are essential for the working of basic functionalities of the website. We also use third-party cookies that help us analyze and understand how you use this website. These cookies will be stored in your browser only with your consent. You also have the option to opt-out of these cookies. But opting out of some of these cookies may affect your browsing experience.
Necessary Always Enabled
Necessary cookies are absolutely essential for the website to function properly. These cookies ensure basic functionalities and security features of the website, anonymously.
Functional
Functional cookies help to perform certain functionalities like sharing the content of the website on social media platforms, collect feedbacks, and other third-party features.
Performance
Performance cookies are used to understand and analyze the key performance indexes of the website which helps in delivering a better user experience for the visitors.
Analytics
Analytical cookies are used to understand how visitors interact with the website. These cookies help provide information on metrics the number of visitors, bounce rate, traffic source, etc.
Advertisement
Advertisement cookies are used to provide visitors with relevant ads and marketing campaigns. These cookies track visitors across websites and collect information to provide customized ads.
Others
Other uncategorized cookies are those that are being analyzed and have not been classified into a category as yet.
SAVE & ACCEPT
43 Shares
Share40
Share3
Tweet
Email