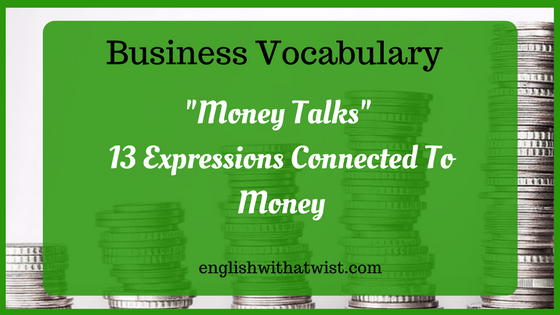 Unless you’ve been holidaying on the planet Zorg, you’ll have noticed or even been caught up in the frenzy of Black Friday, Black Weekend and Cyber Monday sales raging through the retail world.

Did you hit the ‘bricks and mortar’ shops or did you limit your shopping sprees to the online world?

Did you get some fabulous deals?

Whether you turned shopaholic for a day, weekend or week or ignored every single email screaming at you to buy the latest must-have item, you’re probably planning for the Christmas and end of year season.

Or should I say, budgeting? You’ve probably just been paid and this salary payment is going to go towards the Christmas budget.

What better time than to introduce you to 13 expressions related to money that I just know you’ll be using in the next few weeks.

#1 Put your money where your mouth is

How many times have you heard someone make promises to you and not deliver on their promises? And you scream at them to once and for all “put their money where their mouth is”. In other words, to put whatever they say into action.

“If he’s committed to making significant changes, he needs to start putting his money where his mouth is”.

#2 Throw money at something

Most problems in business can be resolved, so long as you throw money at the problem. In other words, money can solve most issues. However, the money could be well spent or could be wasted. For instance, it was no use throwing money at the project because it failed.

“Tom is on the money (correct) when he says that the problem we have is not with the software but its vulnerability to hackers.”

It does indeed. Have a problem? Need something done quickly? If you have money, you’ll get anything you want done. Sad but true.

753km later and it’s time for me to replace my running shoes. I can safely say that I’ve had my money’s worth with those shoes. In other words, I’ve had exceptionally good value from them.

We all like to get our money’s worth from products and services, don’t we? It makes us feel good.

“The smart money says this company will be one of the successes of 2018.” They should know because the smart money is the people who have a lot of knowledge about a subject and whose opinions are respected.

I hope last week’s spending spree didn’t break the bank. In other words, you spent way more than you have.

Or perhaps you’re planning on making a new investment and you’ve budgeted for it and feel confident it will not break the bank (use up all your money).

Because the last thing you want is to end up flat broke after making that significant investment. You still need money to live on and being flat broke is no fun.

#9 Foot the bill (Pay for something, especially expensive)

This month has been especially difficult financially because I’ve had to foot the bill for the extra work we needed done on the website. And that work wasn’t cheap.

Don’t you find it infuriating to see people spend money on anything and everything and behaving like they have money to burn (waste)? What a waste.

“He sold his software company last year so I am sure he’s loaded (rich/wealthy).”

I bet your parents told you that money doesn’t grow on trees every time you asked for too many things when you were little. Sometimes it’s worth reminding ourselves of the value of hard-earned money especially in this over-materialistic world.

When was the last time you spent or invested in something or someone and felt that what you got from it was worth its weight in gold? In other words, what you got back was truly useful or helpful or made a big difference to your life.

If your business provides a service and your clients’ feedback is that your service is worth its weight in gold, wouldn’t you be delighted? I’d be ecstatic.

And with this last expression, I bid you farewell until next week.

PS If you think this post is worth its weight in gold, be a friend and share it with your colleagues and friends on social media.