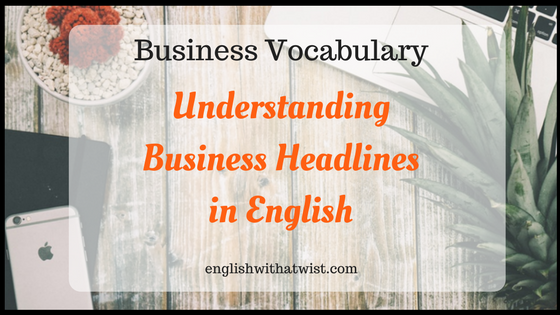 News headlines are difficult to understand whether you’re reading them in your native language or a second language, for example, in English.

Take the cover headline from last week’s edition of “The Week”.

‘Corbyn’s Brexit Plan: Having his cake and eating it?’

Not only does the headline use the idiomatic expression “have your cake and eat it”, it also assumes you have some background knowledge of the topic to understand its meaning.

But even if you don’t have this knowledge, it doesn’t matter. Chances are the headline, with its choice of words, piques your interest sufficiently to read the full article. That’s after all what news headlines are meant to do.

This is exactly what happened to me when I read the headline. I had a vague idea of the topic (I’d heard something about it on the radio), but couldn’t remember the full details. Plus I was intrigued by the choice of the idiomatic expression, so I decided to read the full article.

If you’re wondering why you should bother with the business news in English, you need to read last week’s post.

How do you, as an English learner, learn to understand business news headlines in English?

The short answer is practice, but first, you need to understand how news headlines are created.

The Language of Business News Headlines

Headlines often use strong words to make an impact on you, the reader. Often these words will be idiomatic, informal, slang and forceful.

The expression “rip-off” means something that costs more than it’s worth. In other words, expensive. The headline could read “move to cap expensive energy bills” but it’s not as impactful as saying ‘rip-off’. To ‘rip someone off ‘ in English means to deliberately cheat them. By using the noun “rip-off”, the headline suggests the energy companies are deliberately overcharging their customers.

The word ‘dump’ in this context means to sell large amounts. The headline could have used the more neutral word ‘sold’ but the effect wouldn’t have been the same. The word ‘dump’ is associated with waste or rubbish and suggests something you no longer want.

Headlines are short by their nature which means that verbs and articles are often omitted or left out.

From this headline, the full sentence could be ‘ Starbucks has implemented/decided on/has imposed a ‘latte levy’ trial on disposable cups in London.’

News headlines love playing with words. Some play on words are ingenious and they conjure up vivid images.

Take a look at this:

The AA stands for the Automobile Association. The connection here is with cars, roadsides and car crashes where the cars are damaged  and become wrecks. The business article attached to this headline refers to the financial problems the AA is facing and reports on the profits warning it issued the week before. By using the word ‘wreck’ it suggests the company is damaged and of course, roadside refers to its core business.

There are two definitions to the phrasal verb “rev up”.

#1 You can ‘rev up’ a car or motorbike’s engine, meaning you increase its speed (by accelerating).

#2 If someone is revving up, it means they’re getting excited. They’re revving up for the launch of a new model.

This business headline plays with the words by linking what Aston Morris produces (cars) with news of the company’s announcement that it is back in profit after 8 years of losses and powering ahead.

Some words stay and some get relocated to the dustbin of silly words.

In the headline about Starbucks (see above), “latte levy” is a new word that’s recently appeared in the business press.

It refers to a tax (levy) the UK government wants to impose on disposable cups coffee chains like Starbucks use to serve their coffees (cappuccino, espresso and latte). A ‘latte’ is one of the coffee choices, hence “latte levy”.

The simple tense is often used to replace the continuous or present perfect.

The infinitive is used for the future.

“HNA’s Gategroup to list in Switzerland” (is going to)

I believe the more you read and the more you keep up to date with the latest business news in English, the easier it is to understand the words used in headlines.

Take a look at this headline, for example:

Without knowing the informal expression ‘foul up’, you could work out what this headline is about if you already have some background information.

‘Finger-lickin’ is part of the phrase “finger lickin’ good” that’s been KFC’s slogan since forever.

If you’ve been following the UK news, you may know that last week, KFC ran out of chicken (because of a logistics problem)  and was forced to close 646 shops.

A ‘foul-up’ means a stupid and serious mistake.

You might not know what “foul up” means, but if you’d heard about this news before seeing the headline, you could guess what the expression means.

Of course, you’re not going to understand every headline you read, but that shouldn’t stop you from trying.

One thing you can do to help understand better is to ask yourself questions about the headline before you read the article.

➣ What do I already know about this topic?

➣ Have I heard about it somewhere else?

➣ What could this be about?

➣ What English words do I already know this topic?

Tell me what you discover. You’ll be amazed.