Business Skills: How To Make An Informed and Measured Business Decision in English. 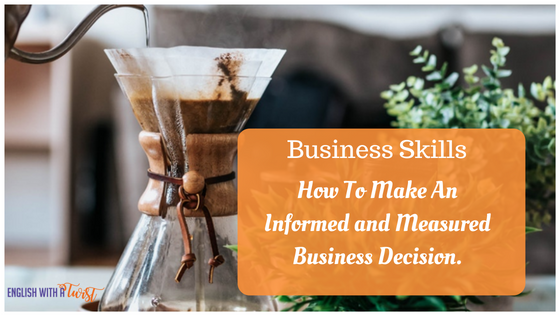 When it’s come to making or taking serious decisions in my life, I’ve always preferred to have as much information and time (if possible) to make a good (sound) informed decision.

Take, for example, the most serious decision I’ve had to make in my life up to now.

When I was undergoing chemotherapy for breast cancer I discovered that I had the BRCA1 gene. This meant that I had an increased risk (compared to the general population) of getting a new primary tumour. In my case, it was a matter of when not if.

I had two choices. Continue to have radiotherapy after my chemo and annual mammograms for the rest of my life, praying each time no tumours were found. Or, have a bilateral mastectomy (removing both breasts) soon after chemo thereby reducing the risk of another diagnosis and giving myself peace of mind.

I found it very hard to decide because I was getting conflicting information about the risk of being a BRCA1 carrier. The risk factor ranged between 40 – 80% increased risk of getting a new primary tumour if I did nothing.

The whole thing was driving me crazy until one day I sat with my oncologist and asked him to tell me honestly what were the risks of doing nothing. He did some calculations and told me that I had a 60% increased risk of having a new diagnosis in a matter of years.

That was good enough for me. I made my decision there and then. I was given the information I had sought and I had weighed up the pros and cons and the pros outweighed the cons. The procedure wouldn’t eradicate the risk entirely (I still had a 2% risk), but I could live with that. After all, there are no guarantees in life.

Thankfully, business decisions seldom have a life and death outcome, but it’s still important to make informed decisions, especially when they affect other people.

Richard Branson is one of the UK’s most successful entrepreneurs. He is the owner of Virgin Group (Virgin Atlantic, Virgin Active, Virgin Money etc) and is a seasoned pro when it comes to making decisions.

In this article in the Virgin website, he shares 5 general rules he’s applied and found helpful when ‘taking the plunge’ (making a decision).

Here are the 5 rules that have helped him achieve success.

If you’re someone who decides on first impressions (say, at a networking event) or follows your gut instincts, that’s fine in your personal life, but it shouldn’t be the way you make business decisions.

Richard Branson says we need to be objective and “mustn’t allow that first reaction to influence your ability to objectively weigh the cons as well as all the pros when they are presented.”

Richard Branson says gathering information and weighing up the advantages and disadvantages is especially important when everyone unanimously agrees on the project.

You don’t want to discover a problem after you’ve gone ahead with the deal.

Even if something appears perfect, it rarely is.

So make sure that all areas have been scrutinised and ‘no stone has been left unturned’.

Have you ever heard of the Disney method of decision-making?

This is where you take your idea or project through three stages of decision-making – the dreamer, the realist, and the critic.

The dreamer stage focuses on the creative aspect and it’s where you share creative ideas and solutions. It has the vision. It asks the question ‘what’.

The realist stage focuses on reality and how to turn the idea into an action plan. It asks the question ‘how’. How is this going to work?

The critic stage aims to identify the weakness in the idea and overcome it in the final plan. They ask the question ‘why’.

You may have other projects ‘on the go’ or about to start.

This new project might be a ‘too good to miss’ opportunity but how will it affect your other projects? Is it wise to put this decision on hold for a while? What are the risks if you do that?

If you cannot manage two projects at the same time, which one should take priority and why?

#4: Do Everything To Mitigate The Downside

When I was in investment sales, I always explained to my clients that our fund managers used different tools like derivatives to minimise the portfolio’s exposure to currency and market risk.

Just like in life, we can’t totally eradicate risk, but we can try and mitigate it as best we can. We can eat more healthily, exercise more, sleep better, take out insurance policies ….(fill in the blank).

The same goes for making business decisions, especially when those decisions affect others and you’re taking some risk.

Richard Branson gives an example of what happened when he started Virgin Atlantic. He says: “the only way I got my business partners in Virgin Records to begrudgingly accept the risks involved was by getting Boeing to agree to take back our one 747 after a year if things weren’t working out as we hoped.”

I would call that a Plan B. Would you?

Richard Branson advises: “If you have the time to use the ‘orchestrated procrastination’ approach then do so. Without getting into the ‘paralysis by analysis’ mode, doing more rather than less homework on a project is seldom a bad thing. While looking at it more deeply you may find better alternatives or the marketplace may change.”

I love that phrase he uses ‘orchestrated procrastination’.  This is very different from the procrastination that so many of us and businesses suffer from. The word ‘orchestrated’ suggests a deliberate choice you make to give yourself the time to make an informed decision.

On the other hand, too much analysis can paralyse the decision-making process. And that’s so true, isn’t it? Sometimes we spend so much time over- analysing something that in the end we feel paralysed and unable to decide.

I’d love to hear about your answers in the comments box.

PS: If you found this post helpful and feel that your friends and colleagues would benefit, please share it with them.