Why just speaking doesn’t win you friends during a conference call. You need to do much more (+ a case study). 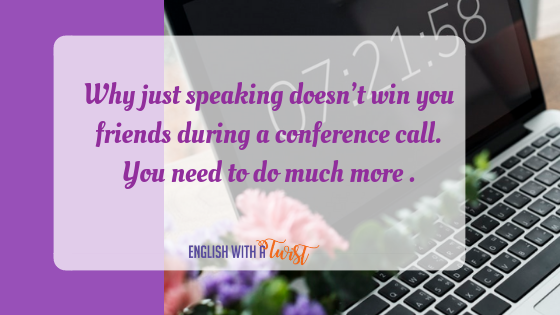 How do you feel about conference calls in English? Relaxed? Anxious? Stressed out?

The most common advice you’ll receive is people telling you to ‘relax and just speak’.

But is it really that easy? More importantly, is ‘just speaking’ enough?

In a recent coaching programme, my client, Tiana told me that she couldn’t understand her colleagues during her conference calls with them. Furthermore, she found these conference calls extremely stressful.

Here’s what she told me:

★ She couldn’t see the participants – not being able to see their facial expressions meant she couldn’t gauge if they were listening, were confused or agreed with what she was saying. It felt like swimming in the dark.

★ She was scared she wouldn’t understand everything that was being said by the other participants during the call. As Compliance Officer, detail is important to her and the fact she was afraid of not ‘catching’ every detail stressed her out.

★ She was so focused on not missing a single thing that was said that the moment she missed something, she panicked and stopped listening.

★ She was scared of interrupting to ask questions because she didn’t want to waste everyone’s time with her ‘silly’ questions.

★ She was scared of not being understood and, if she were asked to repeat a statement, of not knowing how to paraphrase what she’d just said.

When I probed a little more, I discovered that there were normally 10 people participating in the conference calls from around the world.  9 = non-native speakers of English and 1= native speaker.

The native speaker was the Head of Compliance worldwide, whilst the others were all Compliance Officers in their respective countries. This is important to know to establish the hierarchy and authority. For example, when the ‘boss’ speaks there’s more pressure to listen. I wanted to know who the boss was.

“I don’t understand anyone.”

When a client tells me they don’t understand anyone during a conference call, I don’t necessarily believe them. Most people can understand something.

The tendency is to ‘blame’ ourselves for all miscommunication. It’s much easier to do, but it’s counterproductive  because it leaves us feeling hopeless, stressed and dejected. Plus it doesn’t get you anywhere.

In this post, I am going to share how Tiana overcame her tendency to blame herself for those conference calls by digging deep.

Forget the blame game; analyse instead

What you need to do is analyse the situation and deal with the facts. That’s exactly what Tiana did.

Tiana’s assignment was to analyse her conference calls to date.

Her first task was to list all her colleagues out – who they were, where they were from, their native language, their level of English.

Then, for each colleague:

➤ She had to analyse and reflect what happened when they participated in the call.

➤ She had to reflect on and record her understanding. For example, if she understood them why did she think she did, and if she didn’t, why not?

Tiana threw herself into her assignment with enthusiasm and made some striking revelations about her colleagues and about herself (more of this later).

One astonishing discovery she made was when she analysed her Swedish and American colleagues – one non-native speaker and the only native speaker in this group. Both of them were senior people in the company – difficult to ignore.

This is what she found out.

She found it easy to follow her Swedish colleague while more often than not, she ended the conference call more confused than ever when the American spoke!

I asked her to dig deeper into how each of them communicated and this is what she discovered.

Although he speaks quickly, she can follow him because…

● He presents in a structured way > he tells everyone what his next point is.

● He checks for understanding > he has a goal > he has important information to share and he wants to ensure everyone understands the information and can act on it.

● He repeats things not for the sake of repeating but to explain > “Let me repeat this point because it’s important.”

● He asks if anyone has questions and if he doesn’t get a response, he persists by directing a question to a participant >  not with “do you have a question” but by asking their opinion > “Mehmet, how do you think these new regulations could be implemented in the Turkish market?”  Note: He asks open, not closed questions.

● He gives examples to illustrate his points and asks for feedback.

● He follows up each call with a summary email offering additional useful tips.

As Head of Compliance worldwide, she’s the most senior person in the group. When she speaks, everyone must pay attention.

Thing is… do they understand?

➣ She has a lot of information to share during each call.

➣ She speaks A LOT and tends to repeat things often with no added purpose.

➣  As she repeats a lot it’s often difficult to know if she’s introduced new items that could be important > that’s because she’s not directing her listeners to the new information.

➣ Her follow-up emails are always long and unclear > words with no clear meaning > consequently, her emails are often ignored

When Tiana presented me with her findings, I was so excited.

This was glaring evidence of what good and bad communication look like. From her findings, you could clearly see that when the focus was on speaking only, communication stopped.

This is how you can tell the Swedish colleague is a good and helpful communicator.

★ He has information he needs to share but his priority is to ensure everyone understands, appreciates and is confident they know what to do with this information. In other words, he is thinking of his audience.

★ Armed with a clear end goal, he structures his message accordingly and includes pauses for questions along the way never once assuming his message is understood.

By contrast, the American colleague is a poor communicator because:

➤ While she has much information to share, she doesn’t care if anyone understands it or if they can apply it to their work.

➤ It’s more important for her to talk and give the information > what happens after that is not important> there’s no end goal here. Effective business communication should always have a clear outcome.

➤ By focusing on speaking, she’s not taken the time to consider the impact of her words on her listeners > are they confused? do they know what to do next?

➤ If everyone’s confused, what’s the point of the conference call in the first place? Seems a waste of time.

What Tiana discovered about herself

Tiana started her programme under the assumption she couldn’t understand any of her colleagues, and the fault lay firmly at her door, in other words, she blamed her ‘poor’ English.

However, after analysing each colleague’s communication style and reflecting on her experience of each of them she made some significant discoveries.

★ The person who spoke without pausing was the most difficult to understand>>Why>> they didn’t allow their colleagues the time to ‘digest’ the information before proceeding>> they didn’t seem interested  in engaging or involving their colleagues in the call >> they just seemed interested in speaking and having their voice heard, nothing else >> this irritated her and she soon lost the thread of the discussion and stopped listening.

★ By contrast, the person who paused and engaged the colleagues with questions was much easier to follow>>Why? >> she felt part of the conversation, and consequently, more motivated to participate >> she felt her contribution was valued. The increased motivation facilitated her understanding.

★ The person who gave a clear structure, repeated the salient points, insisted on asking questions and getting a response and gave a conclusion made the conference call so much easier to follow >> she felt less stressed out.

★ The problem was not solely hers >> as she identified the different communications styles she realised that her difficulty in understanding her colleagues wasn’t solely down to her ‘bad’ English, but also down to the way they communicated. This was not only a huge relief for her but empowering too.

From her findings, Tiana concluded that just because you have lots of words and can speak fluently and accurately, it doesn’t mean you know how to communicate.

And if you’re not a good communicator, others will find it very hard to follow you.

Communication is a two-way street.

Tiana went from someone who apologised for her ‘bad’ English before every conference call to someone who felt safe and emboldened in the belief that she was a competent and valuable contributor to those calls. I am so proud of the progress she made.

I’ll share with you what happened after her coaching programme when she was given an assignment to complete and what she observed.

If you liked this post and don’t want to miss out on my future posts, why not join the EWAT community (see below) and get encouragement from me and your business peers as you navigate your way to becoming an effective and courageous communicator in English?

As a valued member of the EWAT community, you will also occasionally be invited to join me and your peers to participate in small group coaching sessions where you will have a chance to interact with your peers and take the ‘hot seat’ to get coping strategies from me.