5 Simple Tricks That Will Transform You From Grammar-Obsessed To Confident Business Communicator in English. (Giorgios’s Story). 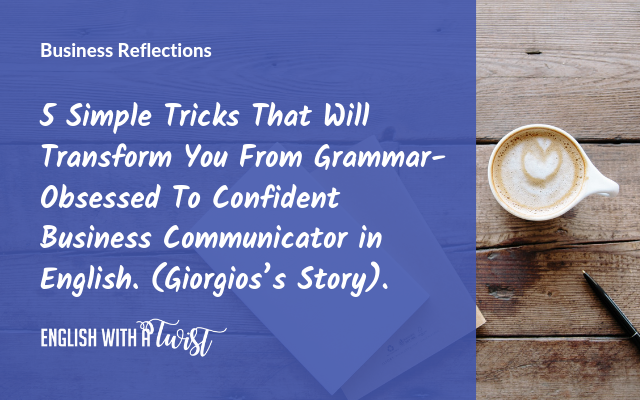 I realised my audience didn’t care about my English grammar. They were more interested in understanding my message.

I couldn’t believe it when Giorgios uttered those words in our catch-up call two weeks ago.

For the 2 years we worked together, Giorgios was obsessed with achieving perfect English grammar, using the latest buzzwords and acquiring a more sophisticated vocabulary in his business presentations.

Despite my attempts to get him to focus on communicating with the English he had.

He believed, as many international speakers of English like you do, that in order to be taken seriously in the international world and to build a credible reputation, he absolutely needed to be fluent and grammar-perfect in English.

I can totally see why he thought that. For years, you and he were told the only way to succeed in the international business world was to master the English Language. To master its grammar and speak mistake-free English.

So you’ve spent years and hard-earned cash on language courses, hours poring over vocabulary lists, grammar worksheets and phrasal verbs desperately trying to achieve the ‘nirvana’ of grammar perfection. Of speaking English like a native speaker.

But all it’s done is erode your self-confidence as a business professional.

Armed with this misleading belief, he embarked on the next phase of his career – the international market with trepidation.

Here’s what Giorgios did at the beginning.

In his new role, he had to give many presentations to his co-workers. He was eager to make a good impression on them not only with the content but also with his English.

He spent hours on each presentation, double checking his grammar, researching more sophisticated language and buzzwords to dazzle his audience.

It was exhausting and… it didn’t work.

His business message simply wasn’t getting through to his audience. They kept asking more and more clarifying questions and he became more and more frustrated.

What was going wrong?

He remembered what I’d said all those years ago about communication and decided to go back to the drawing board.

He took each presentation and carefully analysed them: the content, his presenting style, his audience, their reaction.

This is what Giorgios discovered.

They came from Israel, Romania, Turkey, Morocco to name a few. In other words, they were ALL international speakers of English with varying levels of English.

They too made grammar mistakes, stumbled over their words and went blank when they felt stressed.

So, when it came to listening to Giorgios, they weren’t interested in his grammar mistakes. In fact, they were relieved he made mistakes because it meant he was one of them.

They were far more interested in understanding his business message and what he wanted them to do.

His presentations focused on new concepts and tools his industry was introducing to the market.

Some of these concepts were complex. Indeed, the business environment he works in is complex.

This meant that simplicity was crucial.

Breaking down those complex concepts into small, digestible, easy to understand morsels was what was required if he was going to get his audience to understand him.

The key was to keep things simple. But that’s not easy.

As Steve Jobs once said: “ Simple can be harder than complex. You have to work hard to get your thinking clean to make it simple. But it’s worth it in the end because once you get there, you can move mountains.”

“To get your thinking clean” requires structured thinking.

To get structure, you need to reflect on:

>  What your message is

> Whom your message is for

> What outcome you want to achieve

> What language your audience needs to hear

Once you have a structure, you can achieve simplicity.

Here are the 5 simple tricks Giorgios applied to achieve simplicity and win his audience over.

He decided to stop comparing himself to others. By others, I mean monolingual English speakers (native speakers). He realised he needed to get away from this harmful comparison.

Trick #2:  Think of what your audience needs

He thought hard about who his audience was and what they needed from him.

They needed to understand his message and implement his recommendations. This meant he needed to break things down in manageable sizes.

He structured his thoughts by highlighting the key points he wanted his audience to hear.

With his audience and his key points clear in his mind, he began to build the skeleton of his presentation.

He was giving the same presentation to different audiences so it made sense to have a template. That way all he’d need to do was make some small tweaks to tailor each presentation to his audience.

Trick #4: Use the English you have

He removed all buzzwords, all colloquialisms. He kept his grammar simple. So long as he was clear with timelines (past, present, future) he was fine. No need for the present perfect continuous! He used the English he already had.

The more presentations he gave, the more practice he got,  the more his confidence grew.

With greater confidence, he became more relaxed. His audience responded positively to that and started asking engaging, not clarifying questions.

By reflecting, structuring his thoughts,  keeping it simple and practising, he won his audience over and started seeing positive business results.

He finally accepted that vying for grammar and vocabulary perfection only served to hold him back. All they did was eat away at his confidence. Once he allowed himself to let them go, he was free to express himself in his own English.

I am so proud of Giorgios’s achievements.

By changing his harmful communication patterns, he’s gone from a grammar-obsessed international speaker of English to a confident and relaxed business professional in both his first language and English.

There’s absolutely no reason why you can’t emulate his success.