How to Politely Embrace Conflict (with Your English) 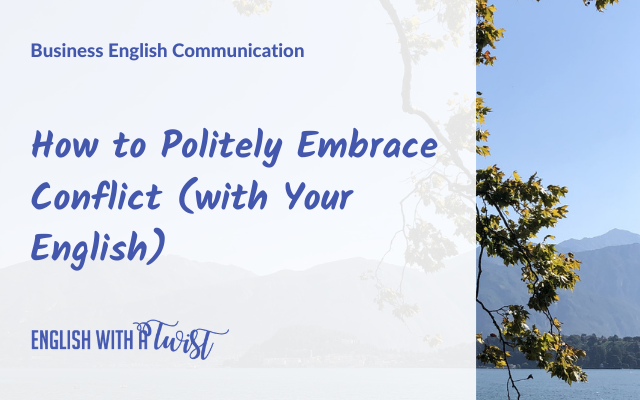 You’ve worked hard for weeks on a client project. You’ve had numerous meetings with them clarifying their objectives, making changes along the way according to their specifications. The day of the presentation meeting arrives and you proudly reveal the end product.

The client then starts wondering aloud if you could make some adjustments to this part and says that they’ve changed their mind on this other part and would like you to change it.

You stare in disbelief. You know that the change they seek will not work. You’re fuming inside and wracking your brain to find the appropriate English words that will politely but firmly tell them that they’re wrong. “If only I had better English…

You were asked to come up with a way to generate more sales at the same time as keeping marketing costs down.  At the team meeting, you present your strategy. Your Head of Unit callously dismisses your strategy and says that they’ve decided to go down a different path.

You’re seething with rage. Not only has he embarrassed you in front of your colleagues, but what he’s suggesting will exacerbate the current situation.

Your brain goes into overdrive as you scramble around looking for the right words to answer back. The worse thing is you have to be polite when all you want to do is punch them in the face! “If only I had more English vocabulary…”

Life would be so much easier if that obnoxious person from XY department would just disappear. Not only do they talk over you, but they also dismiss every single proposal you make before listening carefully to it. You’re a naturally calm person, but they know how to trigger your anger.

You’d desperately like to politely put them in their place but your ‘ lack’ of the right English expressions paralyses you. “If only I was more fluent…”

In all 3 scenarios, you feel your expertise, professionalism and experience under attack.

You have 2 response options. You can either attack back (retaliate) or you can retreat. In other words, you can fight or you can flee.

The fight vs flight myth

Option One: Fight is good. It shows you’re assertive, you’re confident, you have self-respect.

Option Two: Flight is a sign of weakness. It shows a lack of confidence, a lack of self-respect and admittance of defeat.

You want to show you’re confident so, naturally, option one is more attractive but here’s the problem.

The ‘fight mode’ requires the power of words to put someone in their place, to stand your ground and show people that you’re not someone they can walk all over. Politely but firmly.

You hire an English teacher or scroll online to help you find ready-made polite expressions you can use to cope in these situations.

You know the ones.


➜ I understand what you’re saying, however if you were to….

➜ I see what you mean, but have you ever wondered…

➜ I understand where you’re coming from, but I don’t think…

➜ I see your point but I think…

➜ I’m afraid I don’t see it that way.

➜ I’m afraid I have to disagree with you

➜ I beg to differ

You think that with these polite expressions in your box of tricks, you’ll be fine. All you have to do is whisk them out at the right moment and bingo!

The trouble is, one, you can never find your box when you need it.

And two, after those initial expressions you’ve memorised, what comes next? Which way does the conversation go?  Do you keep talking? To what end?

By contrast, flight mode invites you to pause, diffuse the tension, reflect, probe through questions and listen. Flight mode doesn’t need more words. It doesn’t need a box of tricks.

It needs you to communicate and empathise.

Qualities you probably already have. In fact, it’s how you handle conflict situations in your first language. Even if your first instinct is to respond angrily, you resist.

So, why would you want to behave differently in English?  Why do you need more words in flight mode in English?

“Because, even in flight mode, I don’t have the same number of words in English”, I hear you say.

But I wonder if that’s true. I wonder if you don’t already have more than enough English to handle these situations firmly, politely and confidently but don’t realise it.

How can I find out?

By reflecting on and analysing how you communicate during these exchanges in your first language.

Let’s put this to the test.

10 important questions to ask yourself

Take one or two past conflict situations in your first language that you experienced most recently and reflect.

Q1: What was the situation?

Q2: What was the problem and why?

Q3: What did the other person say/do?

Q6: What was your response/action?

Q7: Why did you choose that response/action?

Q8: What was their reaction?

Q9: What was the outcome?

Q10: Was the outcome what you wanted/needed?

Look at your answers. What was the ratio between talking (many words), listening, pausing, asking questions to get your outcome?

What are your findings?

The next time you find yourself in a conflict situation (I hope you don’t) in English, don’t go scrambling for more words. Don’t fight. Don’t be someone you’re not.

With the English you have, adopt the flight mode. Take a deep breath, pause, give yourself some thinking time, ask plainly-worded questions and listen to understand.

Flight mode is the ally you need to be polite and confident to embrace conflict in that meeting in the English you speak.