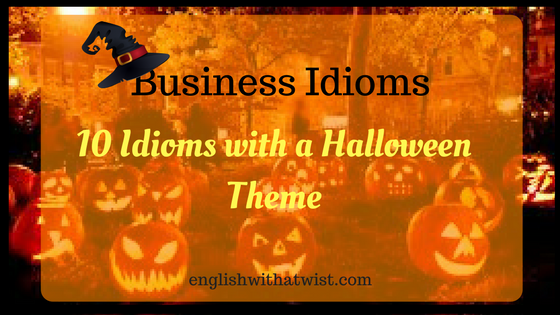 Unless you’ve been living in a separate galaxy in the last few weeks, you will have noticed that many people, including English Language Trainers, have been preparing for Halloween. So not wanting to feel left out I thought I would join the crowd and make my own contribution towards this pagan feast.

What better way than to share with you 10 idioms with a Halloween theme! Halloween is associated with scary and spooky images like witches, black cats, blood, skeletons, ghosts, bats, weapons (knives, daggers) as well as less scary images like pumpkins and owls. I’m sure you can think of others. I’ve chosen 10 idioms with some of these Halloween images. I hope you enjoy them.

Ex: We didn’t have a cat in hell’s chance of winning that contract.

2. Stick the knife in – to do or say something very unpleasant or unkind to someone
Ex: The Sales Director really stuck the knife in when he told Tom that his sales pitch was the worst he’d ever seen.

3. Stab in the back – to stab someone in the back means to betray them
Ex: After all I did for him, he stabbed me in the back when he told all those lies about me.

4. Skeleton in the Cupboard – a scandal that is kept secret
Ex: James has a few skeletons in his cupboard and is terrified that he will be found out.

5. Skeleton staff – the fewest number of people needed in an office
Ex: We always operate with a skeleton staff over the Christmas period.

6. Scared Stiff – so scared that you cannot move
Ex. I am scared stiff of walking on ice.

10. A witch – hunt – an investigation carried out under the pretext of uncovering illegal activity but is actually used to harass people with different views.
Ex: The Government has been accused of carrying out a witch-hunt on small businesses.

Happy Halloween, everyone. I hope you have lots of spooky fun.