The Story Behind the Guy Fawkes Mask 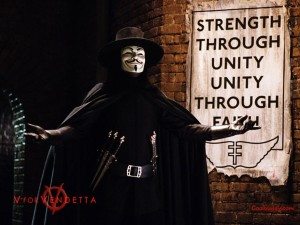 Do you recognise this mask? It’s called the Guy Fawkes mask. It first appeared around the world in the film V for Vendetta.

Since then, it has become the symbol of anti-government and anti-establishment movements around the world.

But why is it called the Guy Fawkes mask? Who was Guy Fawkes? And why do the British celebrate Guy Fawkes Day or Bonfire Night on 5 November?

Bonfire Night is an important event for the English as it commemorates the day the Gunpowder Plot of 1605 was foiled (stopped). 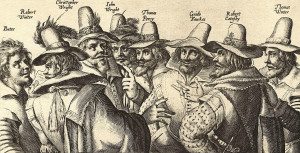 407 years ago, thirteen young English Catholics, including Guy Fawkes, threatened to blow up the Houses of Parliament with 36 barrels of gunpowder. Why?

Throughout Queen Elizabeth 1’s reign the Catholics had been persecuted for their beliefs. When James 1 acceded to the throne, the Catholics hoped the situation would improve, but they were to be disappointed. In fact, James 1 introduced even more stringent laws against the Catholics making their lives intolerable.

This situation led the group of 13 young men headed by Robert Catesby to plot to kill the king and blow up the Houses of Parliament. The plot was simple. The next time that Parliament was opened by the King, they would blow it and him up with gunpowder. They bought the house next to  Parliament that had a cellar which went under the Parliament building. The idea was to place 36 barrels of gunpowder in the cellar and blow the building up.

Guy Fawkes was given the task of guarding the cellar and lighting the fuse when the time came. However, in the early hours of the morning of 5 November, the King’s soldiers seized him and the fuse was never lit.

Fawkes was taken to the Tower of London where he was tortured and executed after confessing.

In celebration of his survival, King James ordered that the people of England light a bonfire on the night of 5 November. 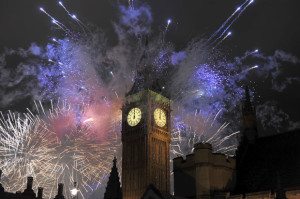 Ever since then, 5 November has become known as Bonfire Night when huge bonfires are lit, elaborate firework displays are organised and effigies of Guy Fawkes are thrown onto the fire. Sometimes, children make effigies of the “Guy” and walk around the neighbourhood asking for “a Penny for the Guy”.

The Gunpowder Plot is so entrenched in British culture that it is immortalised in a children’s nursery rhyme: 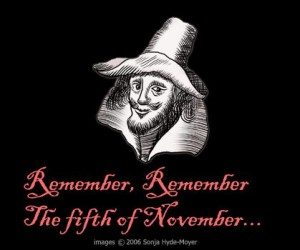 “Remember, remember the fifth of November”

Gunpowder, treason and plot.
I see no reason, why gunpowder treason
Should ever be forgot.

Guy Fawkes, guy, t’was his intent
To blow up king and parliament.
Three score barrels were laid below
To prove old England’s overthrow.

And what shall we do with him?
Burn him!

The Gunpowder Plot was an attempt to fight the existing rulers at the time and Guy Fawkes , his mask to be precise, has a become a powerful symbol of the anti-establishment movement.

Sharing is caring
If you think your friends and colleagues would love this post, do share it with them either via email or social media.

If you want more lessons sent directly to your inbox, join the EWAT community today.