English Grammar Pill: How to use the past tenses correctly

Most of my clients know how to use the past simple tense correctly, that is, to describe finished actions and states. We know when the action happened which may be mentioned or be clear from the situation.

Past habits
“I played tennis when I was younger”.

Actions following one another
” I arrived at the hotel, checked in and went straight for dinner”.

The tricky parts of this tense are normally the pronunciation of the regular verb -ed endings  (for example: kicked /t/, decided /id/ played /d/) and  learning the past tense of the irregular verbs (for example: go – went, buy – bought, tell – told and so on).

PAST CONTINUOUS
The past continuous form can sometimes confuse my clients. In English we use this tense in these following cases as highlighted in the mind map above:

We often use the time expressions “while”, “when” and “as” with the past continuous to mean ‘during the time that something was happening‘

BUT if you mean ‘at the time that’, we only use “when” with the past simple

Past Simple or Past Continuous?
Sometimes you can use either tenses. The past simple suggests a separate, complete action while the past continuous emphasises the duration of the action.

“We were discussing the report for an hour. Eventually we decided to adopt a more direct strategy”. 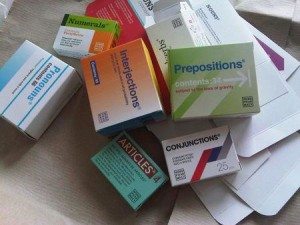 If only we could take some grammar pills!

PAST PERFECT
The past perfect is more used in written English than spoken English. It is used when you have two past, finished events and you want to show clearly that one past event happened before the other past event. The past perfect describes the first event.

Compare these two examples which describe exactly the same situation:

In the first example the two actions are separate in the mind of the speaker. In the second example there is a stronger connection between the two actions. The past perfect emphasises which one happened first.

The past perfect is often used with verbs of thinking, like know, realize, remember, be sure, think.

“When I got to the office, I suddenly remembered that I had left the file at home”.

” I was sure that I had locked the car, but I went back to check just in case I hadn’t”.

“I knew I had got my dates wrong when I found the hall empty”.

The time expressions that are often used with past perfect are just, after, once, by, already, never and meanwhile. The word still is often used in the negative form.

” I had just started dinner when the phone rang.
“It was Friday afternoon and I still hadn’t finished the report”.
“The rain had stopped by the time I arrived at the hotel”.

Used to describes a past habit or repeated action that is no longer true now
” I used to play tennis when I was younger”. (but I don’t now)
“With my old boss we used to have meetings twice a week”

Used to describes past states
“I used to own an Audi A4, but now I have a Renault”
“I used to be in Finance, but now I am an ELT trainer”.

With negatives and questions, used to becomes use to:
“I didn’t use to like writing reports”.
“Did you use to be in sales?”

Would + infinitive  is used in the same way as used to, but it only describes repeated actions in the past, NOT states. It is slightly more formal.
“Before they built the motorway, it would take me an hour to get to work”.
In my next English Grammar Pill post, I will address the present perfect tense. This is the wonderful tense that drives all my clients crazy as the tense does not exist in languages like Italian, French, Spanish and Portuguese and yet is widely used in the English Language.

Even though the present perfect is categorised under the past tenses, it is in effect a present tense that connects to the past. I, therefore, want to specially dedicate a post to it and show how it works with the past simple.

To really get a better understanding of how to use these tenses correctly you need to see them in context. Reading in English is one of the best ways for you to really get a feel of how the tenses are used and in what context. I cannot stress strongly enough how important it is to see the language in context.
So read as much as you can. It doesn’t matter what you read as long as you do.

I think for now, though, I have given you plenty to think about so will end this post here.

If you liked this post, please share it. And don’t forget to subcsribe to my blog if you don’t want to miss out on my posts.