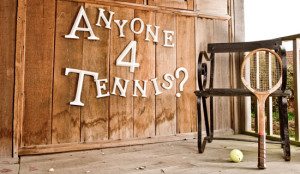 With all the excitement of the FIFA World Cup 2014, you may have not noticed that we’re in the middle of Wimbledon 2014. It won’t have escaped tennis lovers’ notice, however, who will have been enjoying one of the Grand Slam Tournaments of the year here in Wimbledon, London.

Together with Royal Ascot, Henley Royal Regatta, and The Ashes, Wimbledon is one of the regular summer events we have in London. When you think of Wimbledon, you picture strawberries and cream, great tennis and the reliable British weather!

I have many clients who enjoy watching tennis. Some of them stayed with me during the  Wimbledon season and found it hard to follow the television commentary or to simply discuss a match in English with my husband, a tennis lover. They didn’t have the tennis vocabulary in English.

So I thought I’d dedicate this post to all my clients and English Language learners who share a love for tennis by sharing a list of 10 key words you’ll need to follow and discuss a match in English.

3. Break Point – a point which will result in a break of service if it’s won by the receiver.  Ex: Federer has break point. He is 30-40 up. If he wins the point, he wins the championship.

4. Deuce – a score of 40 – 40, after which a player must win two consecutive points to win the game.
Ex: It’s deuce on Nadal’s serve. He is two points from victory.

5. Double Fault – two faults served in a row, resulting in the server losing the point.
Ex: After serving a fault, my second serve was slower to avoid a double fault.

6. Drop Shot – a gentle shot that just drops over the net.
Ex: Serena played a perfect drop shot that took her opponent by complete surprise.

7. Forehand – a shot hit from the racket-arm side of the body.
Ex: Nadal has a very strong forehand, so it is best to play to his backhand.

8. Groundstroke – a shot hit from the back court after the ball has bounced.
Ex: Djokovic is hitting fantastic groundstrokes and has got his opponent on the run.

9. Rally – a long series of shots
Ex: The longest rally in the match went on for 22 shots before Federer put it away with a perfect volley.

10. Volley – a shot on which the ball is hit before it bounces.
Ex: Volleys can be hard to control, so you need to have a strong wrist.

The “zero“ in tennis (only) scores is known as “love”.  It comes from the French word “oeuf”, meaning egg. It was used because the egg’s round shape resembles the figure zero (0).

Do you play tennis? Do you enjoy watching tennis? Are you watching Wimbledon 2014? Who would you like to see win this year?

If you liked this post please share it. And son’t forget to subscribe to my blog if you don’t want to miss out on my posts.