What Can Football Teach Us About Cross-Cultural Communication? 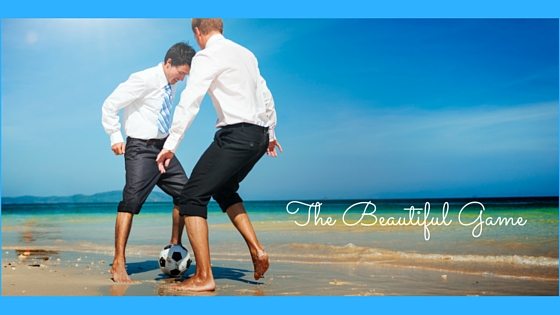 As I write this I am nervously awaiting the results of the EU referendum here in the UK. Today the British people have gone to the polls to decide whether the UK is to remain or leave the EU (also known as Brexit). I sincerely hope my fellow citizens will look beyond the issues of immigration and the refugee crisis and realise that we are an important part of the European Union and we have a responsibility towards ourselves and our European cousins to work with them to make the EU better.

The campaign in favour of leaving the EU has concentrated largely on concerns about immigration and how the flow of people coming into the UK needs to be controlled. While I do accept that any country needs to control immigration numbers, the negative language used during the campaign has saddened me. Why? Because one of things for which I am most proud about being a British citizen is the strong multicultural society we have here in the UK, especially in London and the welcome we’ve always given people. In fact, London is a melting pot of so many cultures and it’s what makes it such a cosmopolitan society. The city embraces people from all cultures with open arms. The fact that the first Muslim mayor in the Western countries was elected here in London tells you something about Londoners’ acceptance of diversity.

I do accept that London doesn’t reflect the rest of the UK and that’s why I decided to look at the beautiful game – football – to see where multiculturalism and cross-cultural communication appear to work throughout the country. I have to thank #Euro2016 for giving me the idea.

Before I start, I want to point out that I don’t like football!!! There, I’ve said it. When my husband settles in for an evening of football, I happily hide away in my office or in our bedroom with a good book. However, I am fascinated to see how the Premier League teams, with more foreign players than homegrown ones in their teams, are able to communicate and succeed on the football pitch. As we all know, football is big business commanding millions of pounds of investment. Everything hinges on the success of the team and their ability to work together on the football pitch. This ability could make or break a club. With different cultures and languages in the teams, how do they communicate effectively and successfully and more importantly, can businesses learn from football?

In their book “The Linguistics of Football” the Innsbruck Football Research Group state that communication (verbal and non-verbal) in football serves three purposes:

Conveying Information
The need to communicate information is especially important for the coach or trainer. It’s vital that the manager is able to communicate with his players whether it’s during training sessions, strategy discussions or private conversations. Most managers will use the Club language, in this instance, English, to communicate with his team. Clearly, he would need to have reasonable knowledge of the club language especially if he’s a foreign manager.  However, non-verbal communication can sometimes be more efficient than verbal communication. For example, a manager could use diagrams of strategic and tactical moves to make his message clear. He can use hand gestures and facial expressions too. I am sure you can think of many managers whose facial expressions and hand gestures are more expressive and clear than the language they’re shouting during a match!

As far as the players are concerned, communication between them is important to create good and harmonious teamwork. If the players can’t communicate successfully, they might feel isolated and this could affect their performance on the pitch.
It’s also important for the players to be able to communicate outside the team with journalists, doctors and so on as well as outside the club where they need time to adjust to the culture of the host country.

Facilitate Integration
For anyone who’s travelled to another country with a different language for work, it’s crucial to have the time  to integrate in your work and home environment. Some companies will offer you assistance with accommodation and the corporate social events may help you feel a part of the team. Football clubs offer assistance to their foreign players so that they feel at home in the club and the society and culture of the host country. That can be in the form of language courses and organising cultural events. Feeling integrated in the team, the club and host country does have an effect on a player’s performance.

Conveying Emotion
Language is important to convey emotions in football – think of when the player wants to communicate with the referee (often angrily!) or in a training session or at an interview or with his players during a match.
Being unable to speak the club language can be extremely frustrating if, say,  a player has scored three times in a single match and cannot be interviewed because he wouldn’t understand the interviewer’s questions!
What’s interesting, according to the research above, is that often the first words the players will learn in the club language are linked to strong emotions (insults, swearwords -I’ll leave these to your imagination!- and  strong words expressing happiness – ecstatic, delighted)
Do we do this in business? What do you think?

Language acquisition
Aside from formal language courses, many foreign players learn the club language on the pitch. In other words, they learn by using the language on the pitch and through trial and error. If their message is not clear, they try again. In that sense, it’s similar to communication in business. If you’re not understood, try another way of expressing yourself.

Football brings us closer
The globalized football team can teach us a lot about how businesses and societies can integrate other cultures successfully. The small world of the football team with its diverse cultures can have national and language clashes, but the team still has to function as a group to succeed and therefore, needs to work through those issues. The success of integration and its impact on the society the team is in is also important. People say that football brings people together regardless of race and language and it is true. For example, when the French team, made up of players of different origins, won the World Cup in 1998, the victory created a feeling of unity among the whole population, regardless of the individual player’s origin or colour.(Source: The Linguistics of Football)

So, who are you rooting for this Euro 2016? I am torn between England and Italy, but I have a feeling come tomorrow’s referendum result, things will be clearer for me. If it’s Brexit, I will most definitely be rooting for Italy.

If the topic of communication interests you, be sure to download your FREE guide to better communication at work in English and subscribe to this blog (see below for the details).