Business Idioms: 10 Idioms in Times of Uncertainty and Change 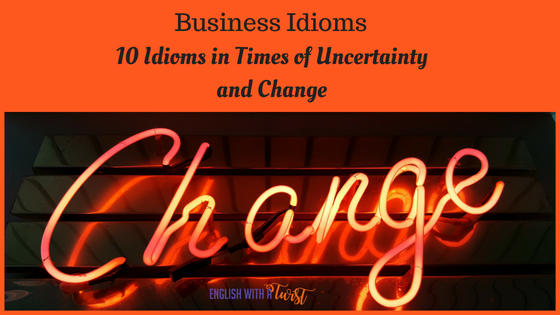 I originally wrote this post soon after the infamous EU referendum that catapulted us into the world of Brexit in June 2016. At the time, I wrote that the UK’s decision to leave the EU had thrown us, and the world, into a long period of seismic change and nerve-wracking uncertainty.

Two years on and we’re still in a period of uncertainty, as far as Brexit is concerned, with no idea of what the changed landscape will look like.

Indeed two years on, more change has occurred and continues do so – with populist movements winning elections across Europe and trade tariffs being imposed by the US.  All this creates even more uncertainty and anxiety.

Our natural human tendency is to resist change because it brings with it too much uncertainty and most of us don’t like that. The stockmarkets most definitely hate uncertainty and so do most businesses because it makes long-term planning challenging.

Of course, the world cannot stay the same, we have to move on and embrace change. If businesses didn’t adapt to the changing times they would go out of business. Think of all those retail companies that haven’t adapted to the way we shop.

Similarly for us, individuals, we can choose to do things in the same way we’ve always done and miss out on innovation, or we could welcome change and enjoy our personal and professional development.

Some people call this the growth mindset.

In the third post of my series on theme-based business idioms, I want to share 10 idioms related to the concept of change and uncertainty.

I’ve used the events of the UK’s EU referendum in 2016 and its effects on the world as examples of how you would use these idioms in context. I’ve made a few changes to bring the examples up to date.

As we saw in June 2016, 52% of British voters chose to leave the EU. By making that historic decision to leave the EU, they voted with their feet. In other words, they decided to do something different. In business, you could have a similar situation with shareholders deciding to vote against the Chief Executive – therefore voting with their feet.

That result was a decisive wake – up call for David Cameron when he realised how badly he had misjudged the mood of the nation. This prompted him to resign as Prime Minister.

This demonstrates how important it is to listen to the electorate, or in the case of businesses, to customers because if you don’t, your wake-up call (warning) would be a loss in sales and market share.

And while there have been many calls to have a second referendum, we have to accept the democratic decision. We cannot simply turn the clock back/turn back the clock. What is done is done.

One of the most disturbing elements of the post-EU referendum has been the way the Brexit campaigners have moved the goalposts. During the campaign, they claimed that the UK would save £350m a week by being out of the EU and that the money saved would go back into our National Health Service. The day after the result, they claimed that they had made a mistake and should never have made the statement!

So we found ourselves having to make a leap in the dark, in other words, jumping into the unknown. We had no idea what was going to happen because the very people who campaigned to leave didn’t have a plan for this country. Two years on, we still don’t know what’s going to happen!

Everything is still up in the air. We have no effective leaders in Government, no one wants to make a decision or has the courage to make one. We are in a state of confusion. It would be farcical if it weren’t serious.

We find ourselves at a crossroads not knowing which way to turn. It is quite unbelievable and shocking. Where do we go from here? (I wrote this sentence two years ago and the situation hasn’t changed).

We are most definitely in uncharted territory/waters. We find ourselves in an unfamiliar/unknown situation. We’ve been in the EU for 45 years and we don’t know what life is going to be like outside the union. This makes markets and businesses nervous.

#9: Go back to the drawing board

The truth is that we’re probably going to have to go back to the drawing board and start again with new trade agreements, new legislation and so on. Some experts say this could take years and cost millions of pounds. With the latest trade tariffs the US imposed on the EU in early June 2018, the possibility of drawing up new trade agreements with the US is even more remote.

This whole situation requires new blood in the Government. We need new people with fresh ideas and perspectives to help us through what is going to be a roller coaster ride.

Update: Well, we’ve had plenty of new blood in the Government sinec 2016, but not a lot has changed!

Please share your answers with me in the comments box.

If you want more idioms, check out my Business Idioms and Coffee To Go series.

Time for some sports

Stay tuned for next week when I’ll share 10 business idioms connected to the world of sports. After all, business is all about competition and there’s plenty of that in sports.

PS: If you found this post helpful and feel that your friends and colleagues would benefit, please share it with them.